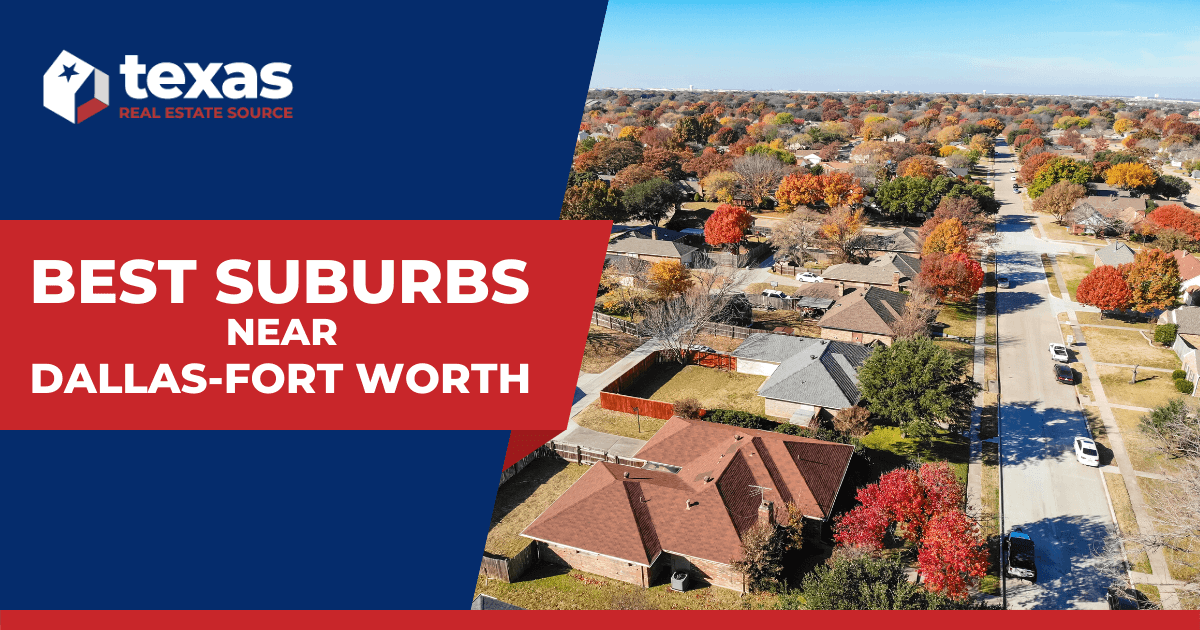 Are you interested in moving to the Dallas-Fort Worth area or one of the 7.6 million people already living there? It's no secret that North Texas is a great place to live, but not many people know about the amazing Dallas and Fort Worth suburbs. There are DFW suburbs with low property taxes, communities centered around lakes, amazing master-planned communities, and so much more. While many people love living in Dallas, Fort Worth, and Arlington proper, others want to live in smaller communities close to the bigger cities.

Rural living just minutes from excellent golf courses and an international airport. These are just some of the many benefits of living in the small city of Colleyville, Texas, an enchanting suburb with a picturesque downtown square. With a population of around 23,000, Colleyville has seen significant growth in recent years yet remains a quiet community within the Dallas-Fort Worth metroplex.

With many beautiful parks and over 11 miles of designated bicycle trails, Colleyville is a wonderful community for outdoor enthusiasts. One of the area's most popular amenities is the Colleyville Nature Center, a 46-acre nature refuge with local wildlife, an amphitheater, over 3.5 miles of trails, a playground, a covered pavilion, and a fishing pier.

Another beautiful green space in the heart of Colleyville is Bluebonnet Hills Memorial Park. While Bluebonnet Hills Memorial Park is a cemetery, the location's 65+ acres have some of the most beautiful gardens in Northern Texas. Within the gardens, the Lake of Whispering Waters has three fountains and a shoreline gazebo, making it a serene, peaceful place. It is also just a 15-minute drive to the Dallas-Fort Worth International Airport. 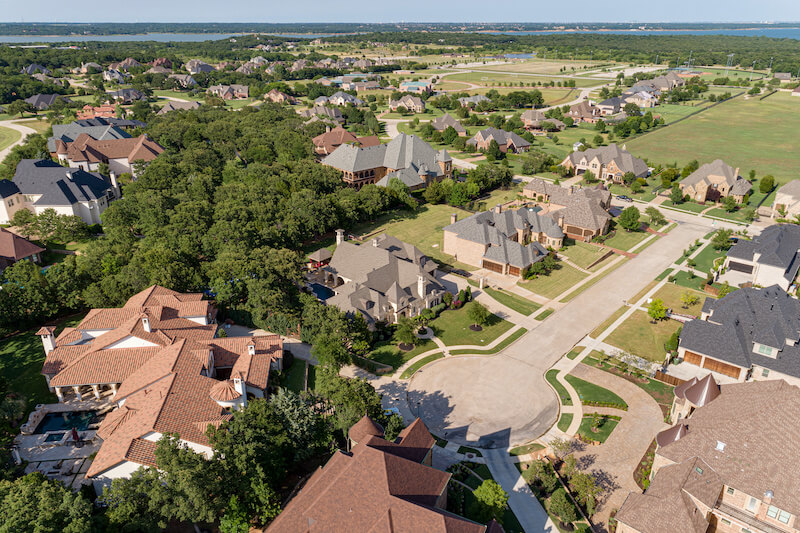 Combining rural suburb living with urban sophistication, the city of Southlake sets the standard for elevated living in North Texas. Located in Tarrant County, Southlake is just 30 minutes from the city of Fort Worth and is an easy commute to Dallas, Arlington, and Irving. With just over 32,000 residents, Southlake is small enough to maintain a sense of community while providing its residents with exceptional amenities like Timarron Country Club. Golf course homes in Southlake provide wonderful views of area courses.

Along with Southlake Town Square, one of the most popular attractions in Southlake is Grapevine Lake, one of the metropolitan area's largest lakes. Just off the lake is Meadowmere Park, which has a public beach and boat landings.

Plano, Texas, is not just a suburb of DFW; it's a city in its own right. With a population of over 285,000 people, the city of Plano is one of the largest suburbs in the Dallas area. This historic city is home to some of DFW's most prominent museums, nature parks, and churches. Take a stroll through the Historic Downtown area to glimpse Plano's storied past. There are plenty of tour options to get a feel for the area's rich history, including walking tours and trolley rides. Don't forget all the boutique shops and restaurants within the downtown area that are worth exploring. 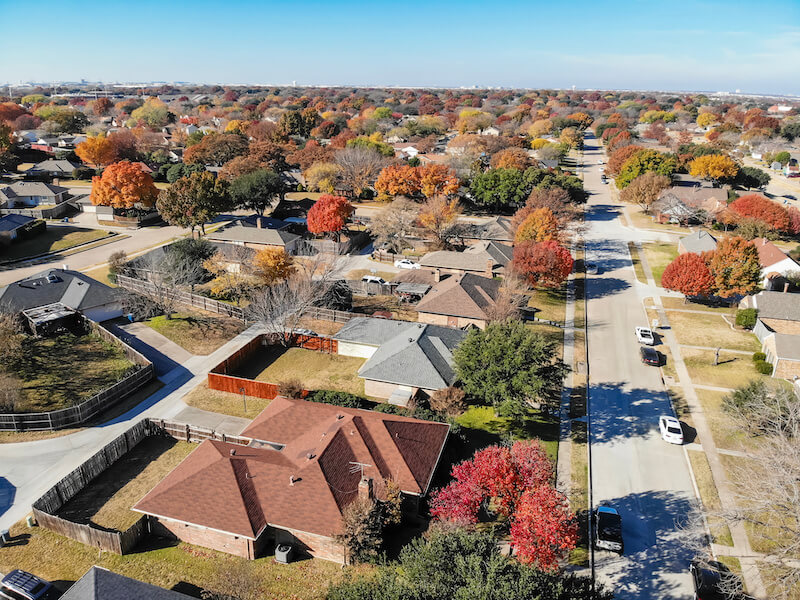 Impressive doesn't even begin to describe the small city of Coppell, Texas. Located less than 30 minutes from the city of Dallas, Coppell is much more than a DFW suburb. Coppell is home to many major companies, including an Amazon fulfillment center, Samsung warehouse, and other major corporations, such as Zales Corporation and Brantly International. Coppell's other significant claim to fame is in gymnastics. Coppell is the home of Texas Dreams Gymnastics, a world-class gymnastics training facility that has trained some of the country's most decorated Olympians.

Coppell has many beautiful parks, including Coppell Nature Park, which has over 66 acres of natural space with nature trails, bike trails, and a picnic area. It's an excellent spot for birdwatching and nature photography. Another one of Coppell's popular hotspots is the Coppell Farmers Market, with locally-sourced plants and produce for residents. And with easy access to all the great activities in DFW, Coppell is a popular suburb for many reasons.

Among Dallas and Fort Worth's many suburbs, the city of Frisco is arguably one of the most popular suburbs in Northern Texas. With an estimated population of around 215,000 residents, Frisco's population growth places it among the fastest-growing cities in the US. Thanks to its proximity to Dallas, its substantial economic opportunities, excellent amenities, and projected developments in the coming years, it's easy to understand why the city is on the rise.

For sports lovers, Frisco is the Dallas area's go-to destination. It is the home of three major sports arenas: The Star, Toyota Stadium, and Dr. Pepper Ballpark. The Star, also known as Ford Center, is one of Texas's most famous sports arenas. While the Dallas Cowboys play at AT&T Stadium in the city of Arlington, The Star is considered Dallas Cowboys World Headquarters and is the team's main practice facility. Toyota Stadium is the home of FC Dallas, the city's Major League Soccer team, and hosts many events, concerts, and other soccer matches. Dr. Pepper Ballpark, also known as Riders Field, is the home of the Double-A Frisco RoughRiders and is considered one of the nation's best minor league baseball fields. 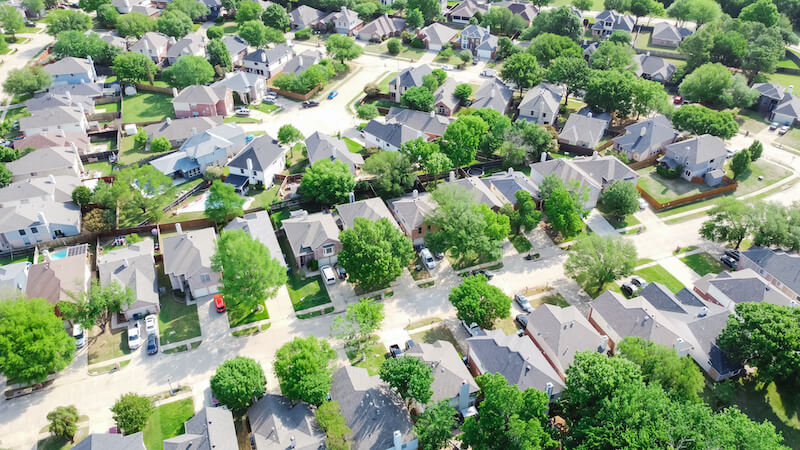 Centrally located in Denton County and Tarrant County, the town of Flower Mound is a beautiful suburb northeast of Fort Worth. With a population of around 76,000 residents, Flower Mound is small enough for residents to be part of the community while having tons of big-city amenities.

Set along beautiful Grapevine Lake, Flower Mound is also the home of Rockledge Park, a local park dedicated to lakefront recreational activities, such as swimming, boating, and water sports. The town offers a variety of real estate listings, but Flower Mound's luxury homes are spectacular.

Located just 20 minutes from Downtown Dallas, the city of University Park is home to Southern Methodist University and neighbors the town of Highland Park. University Park is considered one of DFW's most desirable places to live with its spectacular museums and gorgeous green spaces. One of the town's most famous landmarks is the George W. Bush Presidential Center, a museum dedicated to the political legacy of our nation's 43rd president. The museum showcases many exhibits and archives, including the George W. Bush Presidential Library. 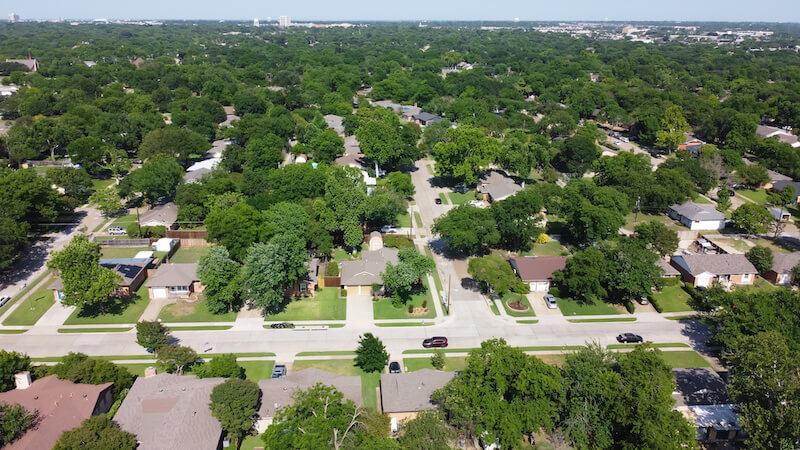 Regarding location, it's hard to beat living in the city of Richardson, Texas. Ideally located northwest of the city of Garland, Richardson is one of the larger suburbs of the DFW area, with a population of over 112,000 residents. One of Richardson's biggest claims to fame is the University of Texas-Dallas. Beyond the university, another draw of living and working in Richardson is its strong local economy.

Along with its abundance of economic opportunities, Richardson has plenty of amenities, from beautiful city parks to fabulous entertainment venues. The Charles W. Eisemann Center for Performing Arts and Corporate Presentations is a modern venue popular for many events, performances, and conventions.

Dallas-Fort Worth's suburbs come in all sizes, from small rural towns that share school districts to bustling cities complete with public transportation. Whether close to prominent universities, the DFW International Airport, or some of the area's most prominent corporations, Texas residents are sure to find a wonderful suburb in the Dallas-Fort Worth metroplex that's right for them.