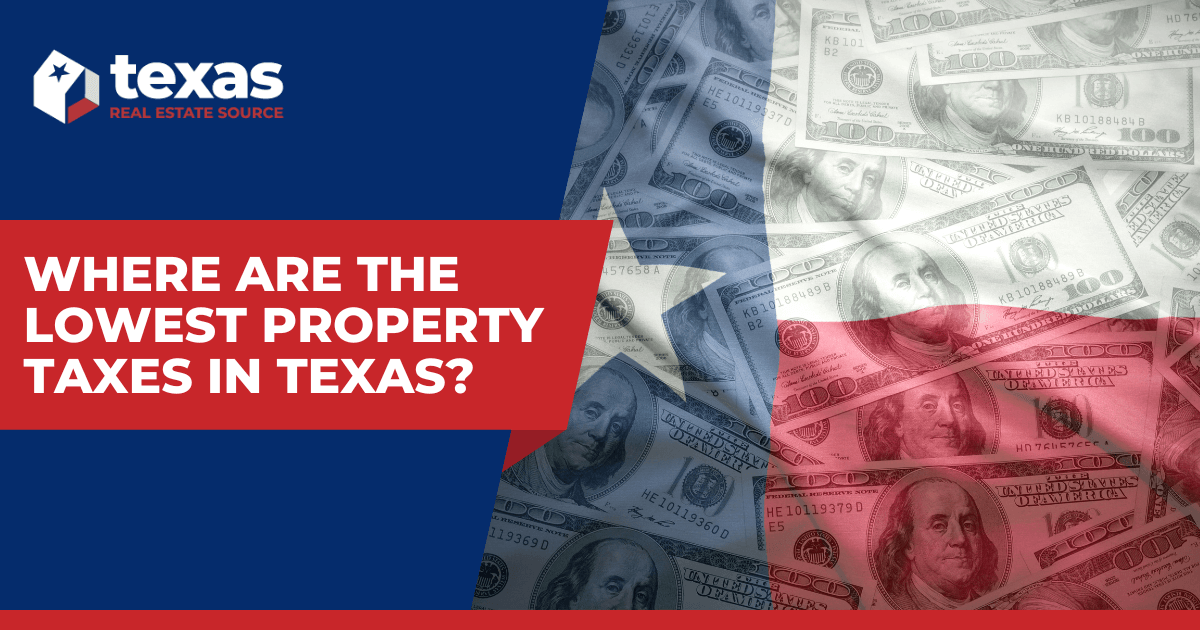 Trying to determine an average property tax rate in Texas is challenging. Property appraisals and assessments in the state are done at the local level, with taxes levied by a combination of entities within each county, including cities, school districts, various special districts, and the counties themselves. As you'll see in this guide, average Texas property tax rates and total bills vary greatly from county to county.

By factoring in the different median appraised property values and total annual taxes collected in each county, we can calculate an average county-by-county property tax rate. Statewide, the effective average property tax rate is around 1.81 percent, with Texans paying a median annual property tax of $2,275 on homes appraised at around $126,000.

Compared with state averages, property tax rates and totals are typically lowest in rural counties. Homebuyers in Lubbock, Amarillo, and other towns in the less populated parts of Texas will generally pay less in property taxes than in the big cities. Midland-Odessa, for example, is one of the most affordable metro areas in Texas. Some taxing districts within the Dallas–Fort Worth, Houston, and Austin metro areas stand out from their neighboring counties, though, with comparably more affordable property taxes.

Counties With the Lowest Property Taxes in Texas 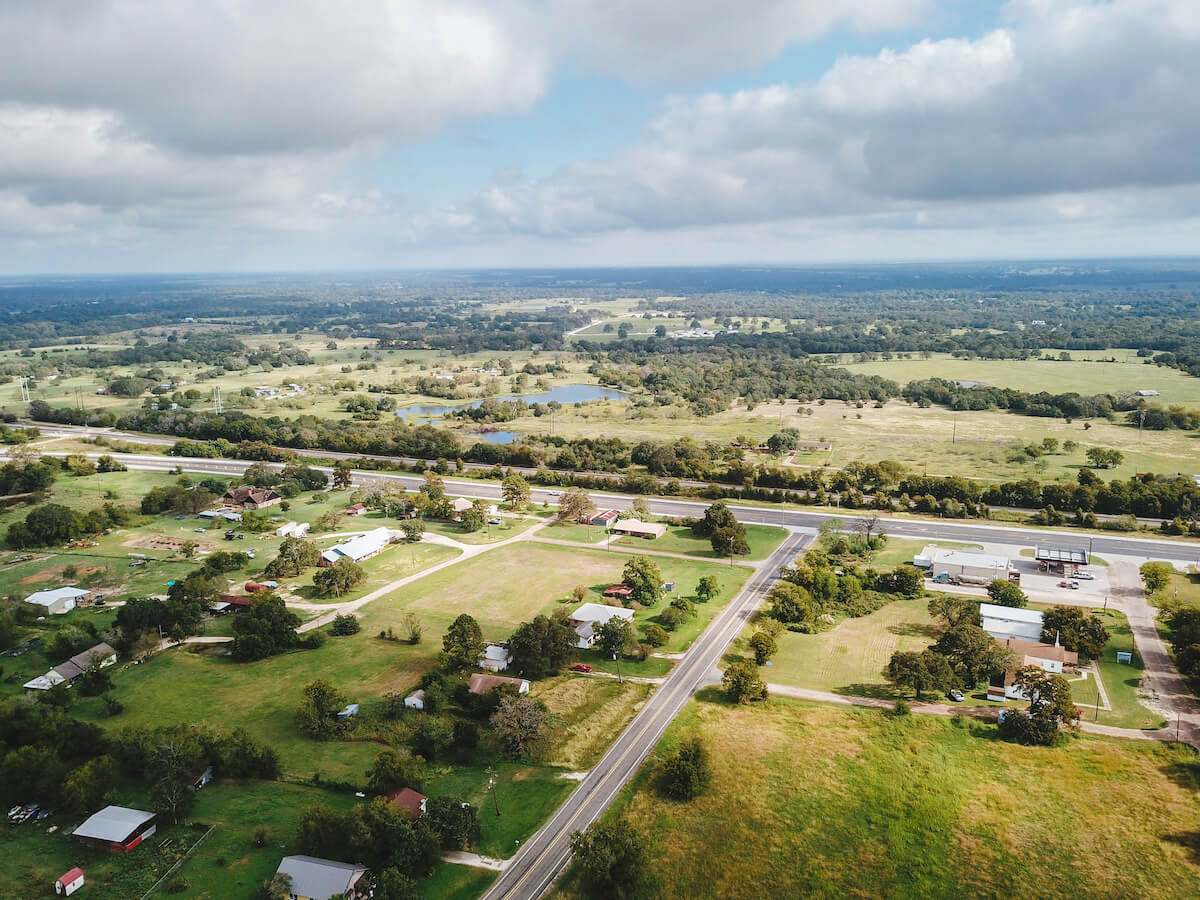 Among the most rural regions in the state is Terrell County, with 2,300 square miles of ranchland running along the Texas–Mexico border. Located about an hour's drive southeast of the city of Fort Stockton, the Terrell County seat of Sanderson is the county's primary residential hub. Otherwise, there are no incorporated municipalities within the county, and fewer than 1,000 folks make their home here.

Median annual property taxes in Terrell County total about $285 on properties with an appraisal value of less than $45,000. The result is an effective tax rate of 0.67 percent, well below the state's average.

Just north of Fort Stockton in rural West Texas lies Ward County. This region's 836 square miles are bisected by Interstate 20, running from the county seat of Monahans in the northeast corner to the small city of Barstow in the southwest. Ward County has just a few other municipalities within its borders, with a population of just over 11,000.

The median yearly property tax bill for homeowners in Ward County is about $342 on properties with a median value of around $45,000. The resulting effective average tax rate of 0.76 percent ranks Ward among the lowest of all Texas counties.

Another rural region in the state is the 1,000 square miles of Rio Grande Valley oil fields and ranchland of Zapata County. Situated along the Texas–Mexico border at Falcon Lake in rural South Texas, Zapata County has fewer than 15,000 people. No incorporated towns or cities are within its boundaries; therefore, no municipal government entities exist.

Median property taxes for Zapata County residents run around $359 per year. With a median property appraisal of just over $47,000, the average property tax rate for homeowners in Zapata is 0.76 percent, among the state's lowest.

Located just south of the Midland-Odessa area in the Edwards Plateau oil-producing region of Texas is the 1,242 square miles of rural Upton County. The district has few incorporated municipalities and a sparse population of just over 3,000, ranking it among the state's least populous counties.

Homeowners in Upton County pay a median property tax bill of $359 per year on properties valued at around $43,000. The effective average tax rate of 0.84 percent remains among the lowest for taxpaying Texans.

Southwest of San Antonio, between the Texas cities of Uvalde and Carrizo Springs, is Zavala County. Primarily ranch and farmland, the rural county spans about 1,300 square miles and is home to a population of around 12,000. Beyond the county seat of Crystal City, the county has few other incorporated municipalities.

Taxpayers in Zavala County pay an annual property tax of about $369 on properties appraised at a median value of just under $37,000. The county bills an average property tax rate of about one percent.

15 Counties with the Lowest Property Tax Bills in Texas

Where to Find Low Property Taxes Near Major Texas Cities

Major metropolitan areas in Texas typically have higher property taxes than their more suburban neighbors. While tax rates and property values vary from one county to the next, taxpayers in the suburban counties near Houston, Austin, and Dallas–Fort Worth generally pay less than those living in the cities themselves.

The primary counties comprising the Greater Houston area include Harris, Montgomery, Fort Bend, Galveston, and Brazoria. With median home values of about $140,000 and effective average tax rates hovering right around two percent, taxpayers in Galveston and Brazoria counties generally pay the lowest total property taxes in the area. However, homebuyers considering more expensive luxury homes might look to Montgomery County and its average effective tax rate of 1.99 percent, the lowest in the five-county region. It’s also worth considering individual city taxes to find the cities with the lowest property taxes near Houston.

Property taxes in Galveston County are levied at an average rate of 2.01 percent on homes with median values of $141,400, resulting in a yearly median tax bill of around $2,830.

Homeowners in Montgomery County pay a little over $3,100 a year on properties appraised at a median value of around $157,000. The effective average Montgomery County property tax rate is just under two percent, the lowest in the region. 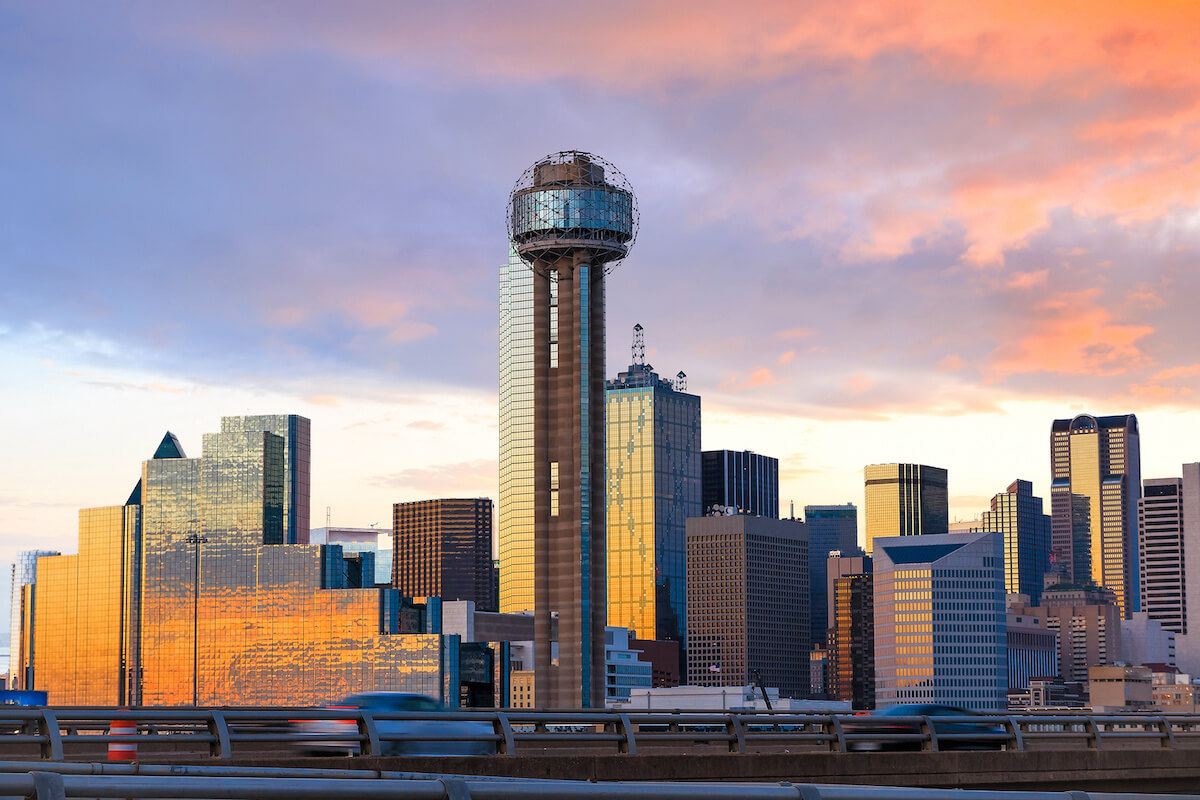 Counties in the greater Dallas–Fort Worth area include Dallas, Tarrant, Denton, Collin, Ellis, and Rockwall. Property tax rates are generally about the same in each county, but lower median property prices in Ellis and Dallas counties result in lower average tax bills for residents of those districts. And, of course, homebuyers can search for individual Dallas-Fort Worth suburbs with low property taxes.

In Denton County, property taxes bills typically total about $3,800 on properties worth the median appraised value of more than $178,000. The Denton County property tax rate averages about 2.14 percent of fair market value.

Ellis County taxpayers enjoy the lowest average property tax rate in the DFW area at around 1.84 percent. Median property values of $136,000 result in an annual Ellis County property tax bill of about $2,500.

Rockwall County collects an average of 2.14 percent of fair market value on homes appraised at a median value of $189,000. This results in an annual property tax bill of around $4,050 for county residents. 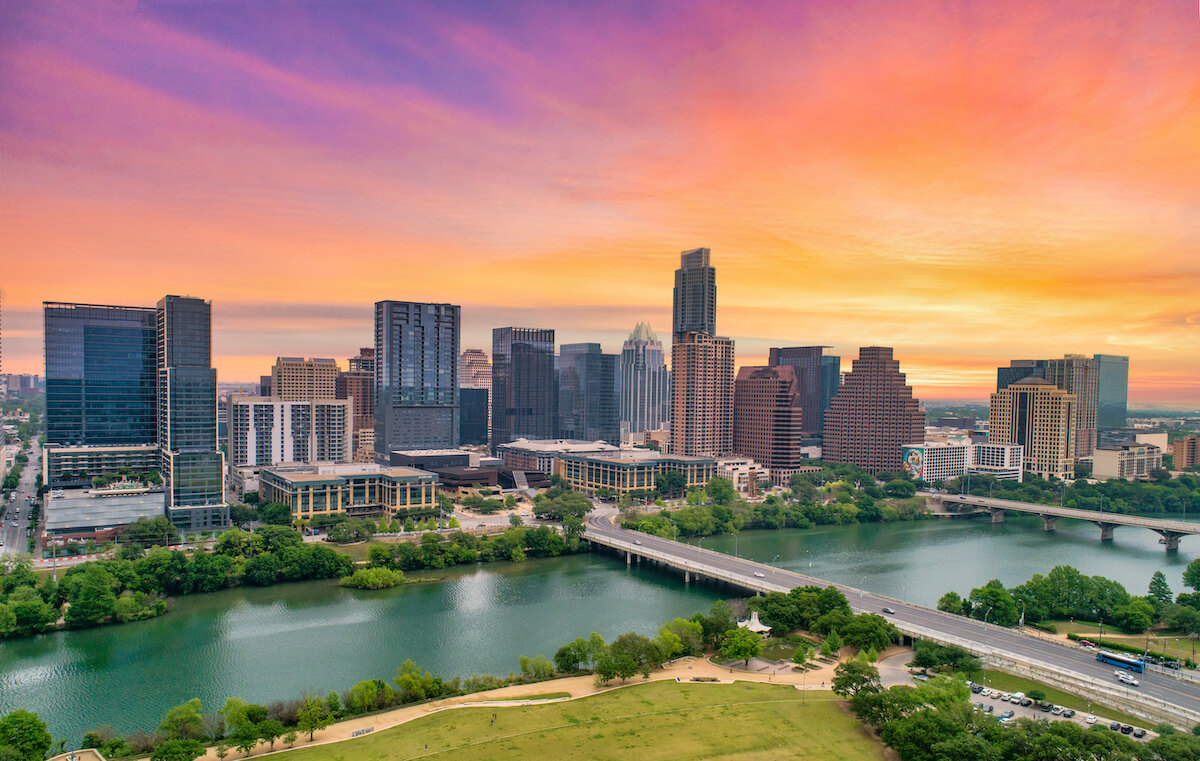 The greater Austin area includes the counties of Travis, Williamson, Hays, and Bastrop. Of the four, the more rural region of Bastrop County collects the least property taxes on average. It's also the county furthest away from the metroplex. Worth noting is that residents of Williamson County, home to many of Austin's major suburbs and the area's highest average property tax rate, actually enjoy comparatively lower average tax bills due to the county's reduced home prices. Take a look around to find the Austin suburbs with the lowest property taxes.

Median property taxes in Williamson County total a bit over $3,800 per year for homes appraised at the median value of around $172,000. The county levies an average property tax rate of 2.22 percent.

Hays County homeowners pay median property taxes of more than $3,400 per year on property valued at around $173,000. The resulting property tax rate for Hay County works out to about 1.97 percent of fair market value.

Property taxes for Bastrop County residents total a median amount of nearly $2,270 per year on homes appraised at a median value of almost $120,000. The average Bastrop County property tax rate runs about 1.89 percent.

15 Counties with the Highest Property Tax Bills in Texas

How to Lower Property Taxes in Texas

Homeowners interested in learning how to lower property taxes in Texas will generally find their available options to be via qualified exemptions or by protesting their property's appraised value.

The residential homestead exemption in Texas is the most common method for reducing property tax liability. The state tax code stipulates that property owners qualifying for the Texas homestead exemption be automatically eligible for a $40,000 reduction in their appraised value. Additional total or partial property tax exemptions are available to persons age 65 or older, disabled persons, military veterans, and surviving spouses.

Taxpayers also have the right to protest Texas property taxes. Reasons for protesting property taxes in Texas include changes in fair market value, inaccurate or inflated appraisals compared to similar properties, or alterations to the property's intended use. Successful appeals are typically met with a settlement offer from the county, resulting in a reduced property tax bill.

Although Texas property taxes may rank among the highest in the country, certain rural counties in the state feature significantly lower property tax rates. As a result, homebuyers might find the prospect of luxury home buying in the state's less populated regions worth pursuing. And, compared with their big-city neighbors, some suburban taxing districts have relatively favorable property tax rates and totals. It's also worth noting that Texas has low sales taxes and zero personal income tax, helping to offset above-average property taxes.

Homeowners can find lower property taxes away from the cities. They can find more favorable rates and totals in certain counties near big city areas. And, if property taxes still seem too high, Texans have options to lower them even more. 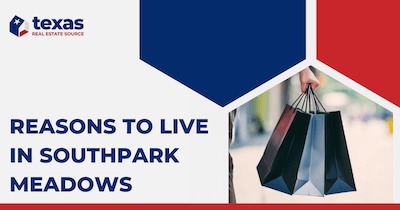 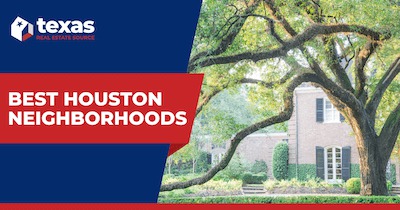