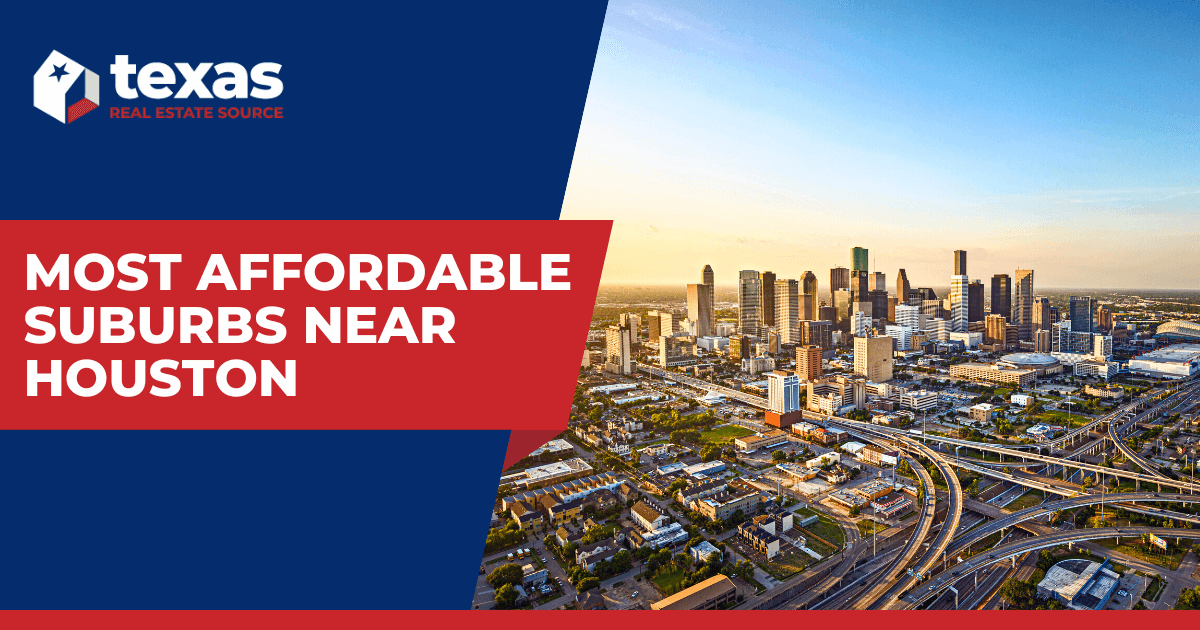 Housing costs in Houston continue to rank among the lowest in the country, beating out more than a dozen other major metropolitan areas. Home prices here remain more affordable due in part to the large quantity of available property, reduced tax rates, and fewer building restrictions compared with the rest of the nation. These are just a few of the contributing factors behind so many people moving to Houston.

While there are expensive Houston suburbs, several others provide homebuyers with even more value, offering a wide variety of properties at prices ranking among the least expensive in the entire area. Read on to explore five of the best and most affordable Houston suburbs. 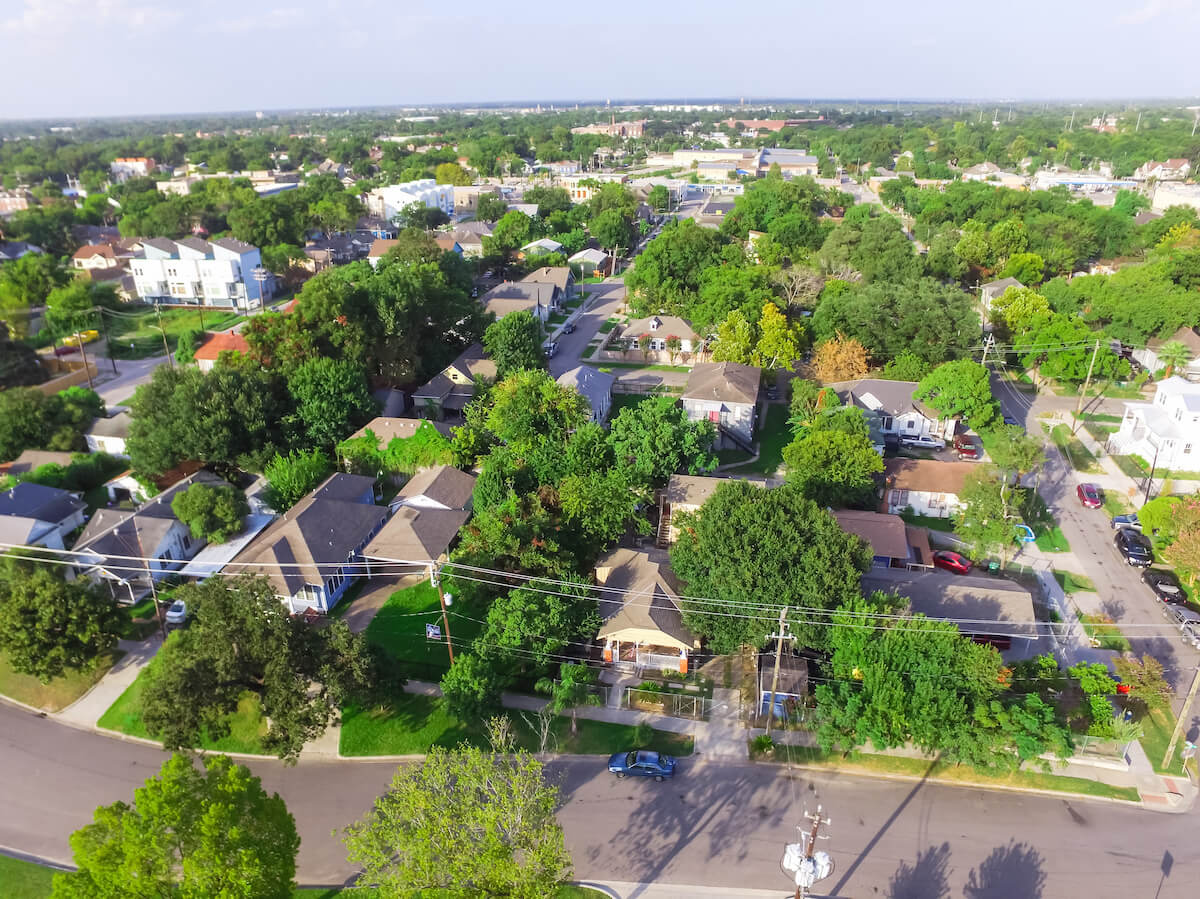 Built along the banks of Buffalo Bayou during the Texas railroad boom of the late 1800s, the settlement was initially called Clinton. Spurred by the rise of the petrochemical industry in the early 1900s, the city was renamed in tribute to the Galena Signal Oil Company of Texas, owners of the area's first refinery. At the time, the city had fewer than 300 residents. Today, more than 10,000 folks call Galena Park home.

Galena Park is positioned on the north side of the Houston Ship Channel, about ten miles east of downtown. The nearby Port of Houston and numerous petrochemical companies are among the area's top employers.

The median home prices here are about $200,000, significantly less than the national average and well below the Houston median home price of more than $350,000. Many homes for sale in Galena Park are priced from the $100s, while newer properties list in the $200s and $300s, making Galena Park one of the most affordable Houston suburbs.

Residents here enjoy plenty of dining and entertainment options. Several popular Tex-Mex spots are scattered throughout Galena Park, including local favorites Taqueria Joshy, La Reyna, and El Rinconcito Mexicano. Beer lovers can dive into the Budweiser Brewery Experience at the nearby Anheuser-Busch brewery, while boat lovers can embark on a free 90-minute cruise of the Houston Ship Channel. Anyone looking to get some sand between their toes will find the beaches of Galveston Island just an hour away. 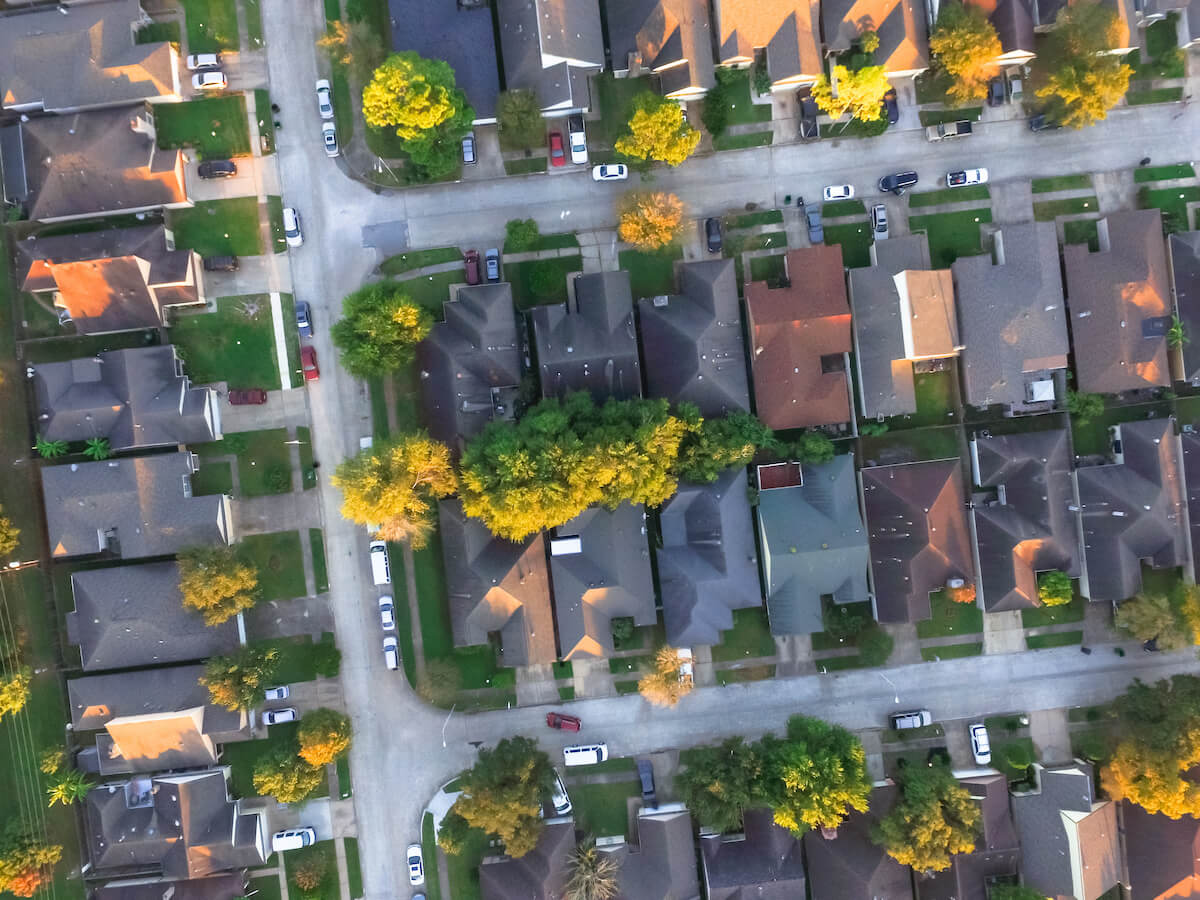 The city of Jersey Village was formed in the 1950s on an old dairy farm where Jersey cattle once grazed. This suburb, 20 miles northwest of those living in downtown Houston, is now home to 10,000 residents.

A few hundred homes are located in Jersey Village, with a mix of property styles, sizes, and prices. The standard for homes for sale in Jersey Village is 2,000 square feet or more and three-plus bedrooms. Properties built in the 70s and 80s and many of the area's newer homes are priced from the $300s, putting Jersey Village among the most affordable Houston suburbs for homebuyers to consider.

With a location convenient to the Sam Houston Tollway, SH-6, and FM 1960, getting around Houston from Jersey Village is relatively easy. Folks here are about 20 miles from George Bush Intercontinental Airport and less than 30 minutes from Houston's Energy Corridor. Top employers in the area include BP, ConocoPhillips, Shell, and Baker Hughes.

When work is over and it's time to play, the horse crowd hits the track at nearby Sam Houston Race Park for Thoroughbred and American Quarter Horse racing. Folks here will also find a few favorite dining spots and watering holes. Grab a beer and a burger at The Backyard Grill, or, despite flaunting its out-of-town name here in Texas BBQ country, Memphis Style Bar-B-Que is worth a visit. 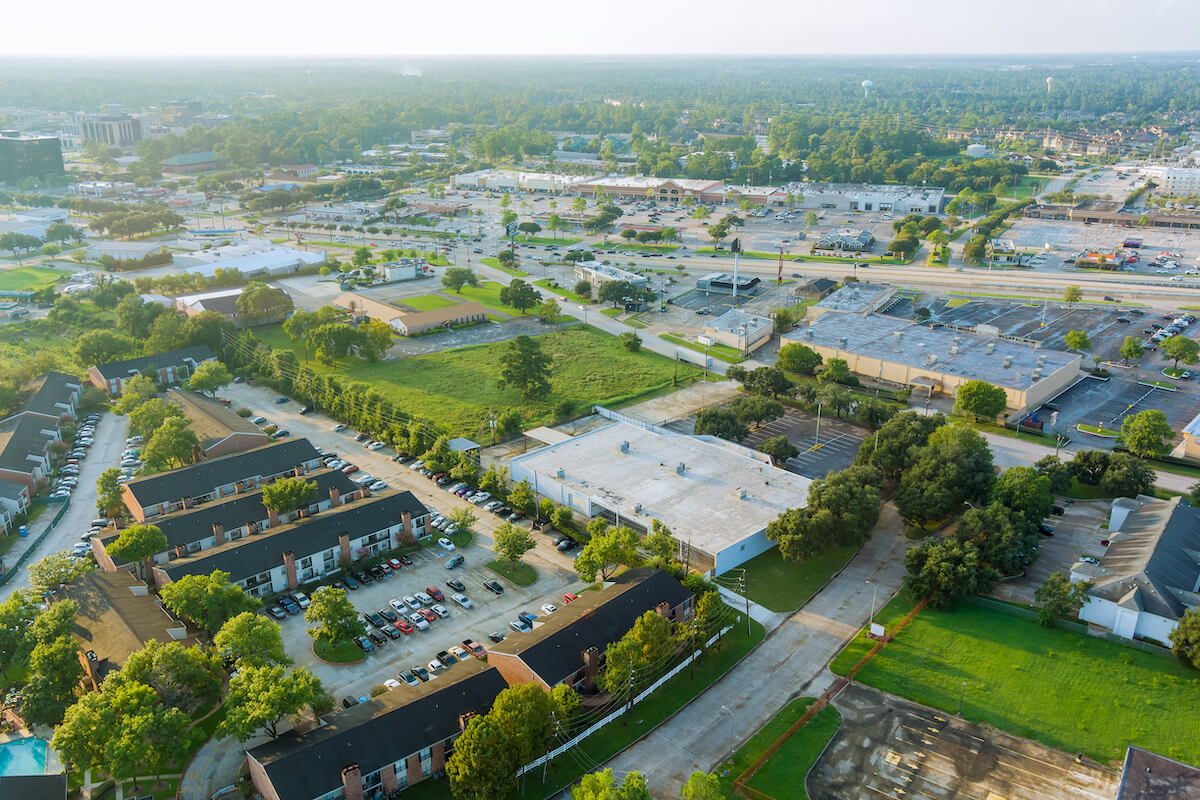 First settled in the early 1820s, the area was often referred to as Mudtown due to its dirt streets and frequent flooding from the nearby Brazos River. The city of Rosenberg finally paved Main Street in 1930 for the driving enjoyment of the 2,000 that lived there. Today, Rosenberg's population of 40,000 live in some 15,000 households—and all the city streets are paved.

Homes for sale in Rosenberg are a mix of old and new, with condos and single-family homes priced below the average for the rest of the country. Many homes built in the 1970s and 1980s list from the low $200s, with plenty of more modern properties and new construction homes in Rosenberg starting from the $300s.

Rosenberg is located in Fort Bend County, a little over 30 miles southwest of downtown Houston, usually less than an hour away. Residents who avoid the big city commute can find local employment opportunities with companies like FedEx, Halliburton, Frito-Lay, and Biotics. Fort Bend Independent School District is also a top employer in the area.

Popular destinations include historic downtown Rosenberg and its many unique shops, thriving arts scene, and many hidden surprises worth searching for. The Black Cowboy Museum is another interesting stop, offering memorabilia, exhibits, and educational resources showcasing famous African-American cowboys.

The area also offers an abundance of outdoor activities. You might spot an alligator while camping or fishing at Brazos Bend State Park, just 20 miles from Rosenberg. And the Gulf Coast beaches of Freeport and Galveston are just over an hour away. 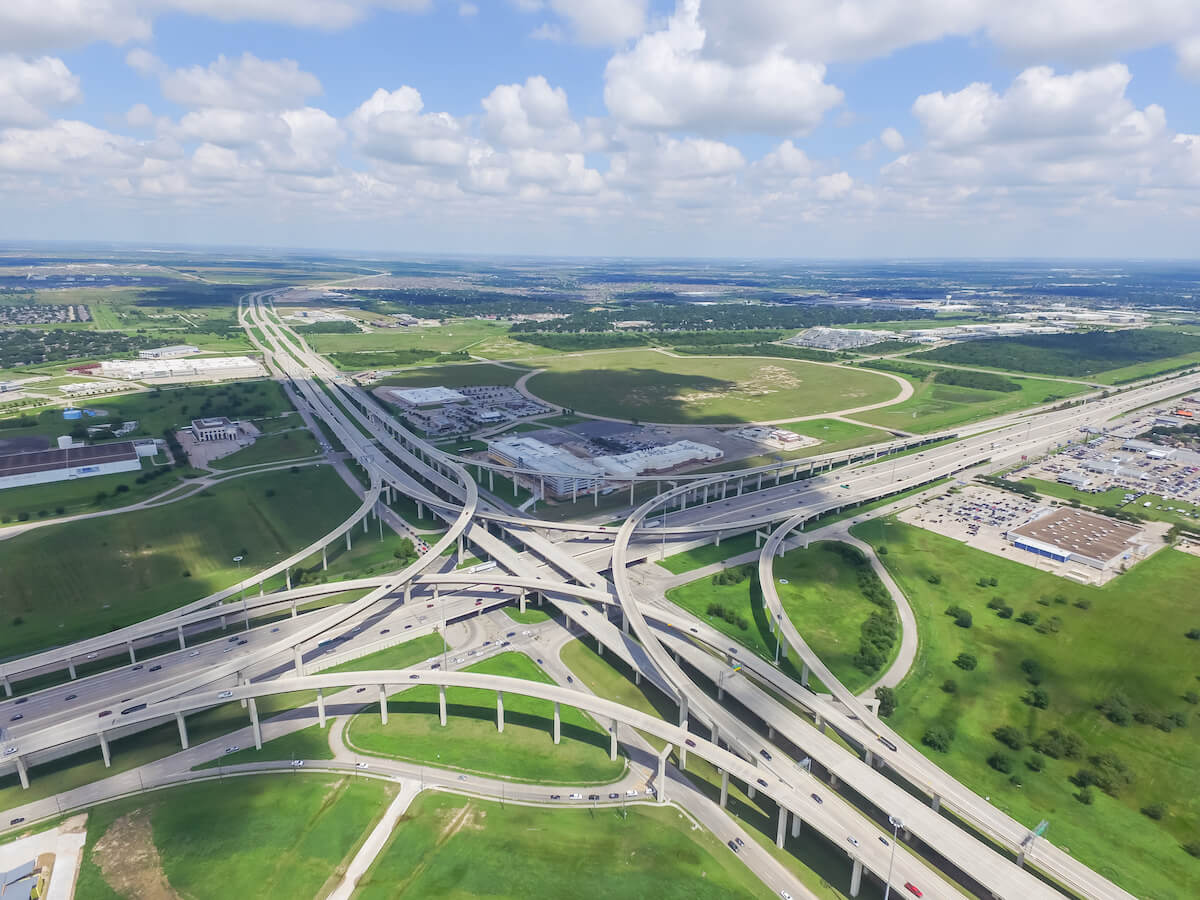 The Greater Katy area refers to a section of Houston's west side, generally defined by Eldridge Parkway to the east and the small town of Brookshire to the west. The region spans several miles on both the north and south sides of Interstate 10, and the actual city of Katy lies within its western reaches. While the city of Katy's population is around 25,000, the number of folks living in the Greater Katy Area is closer to half a million.

On this side of Houston, dozens of neighborhoods and new home communities offer homebuyers a mix of property styles, sizes, and price ranges. Among the most affordable subdivisions in Greater Katy are Marvida Trails, Camillo Lakes, and Sunterra, with homes in these neighborhoods priced from $250k. The area features townhomes, freestanding single-family properties, and larger luxury homes, with plenty of new construction homes for sale in Katy.

Greater Katy's location is convenient to many of Houston's top employers, with several major energy corporations headquartered on the city's west side and the Houston Energy Corridor. The Katy Independent School District employs several thousand area residents. The region also hosts the headquarters for companies like Igloo Corporation and Academy Sports and Outdoors.

In the heart of the Greater Katy Area is the locally famous Katy Mills shopping mall, a popular retail destination featuring AMC Theatres, Bass Pro Shops, Off Fifth Saks Fifth Avenue, and Rainforest Cafe, among the many retail, dining, and entertainment options. 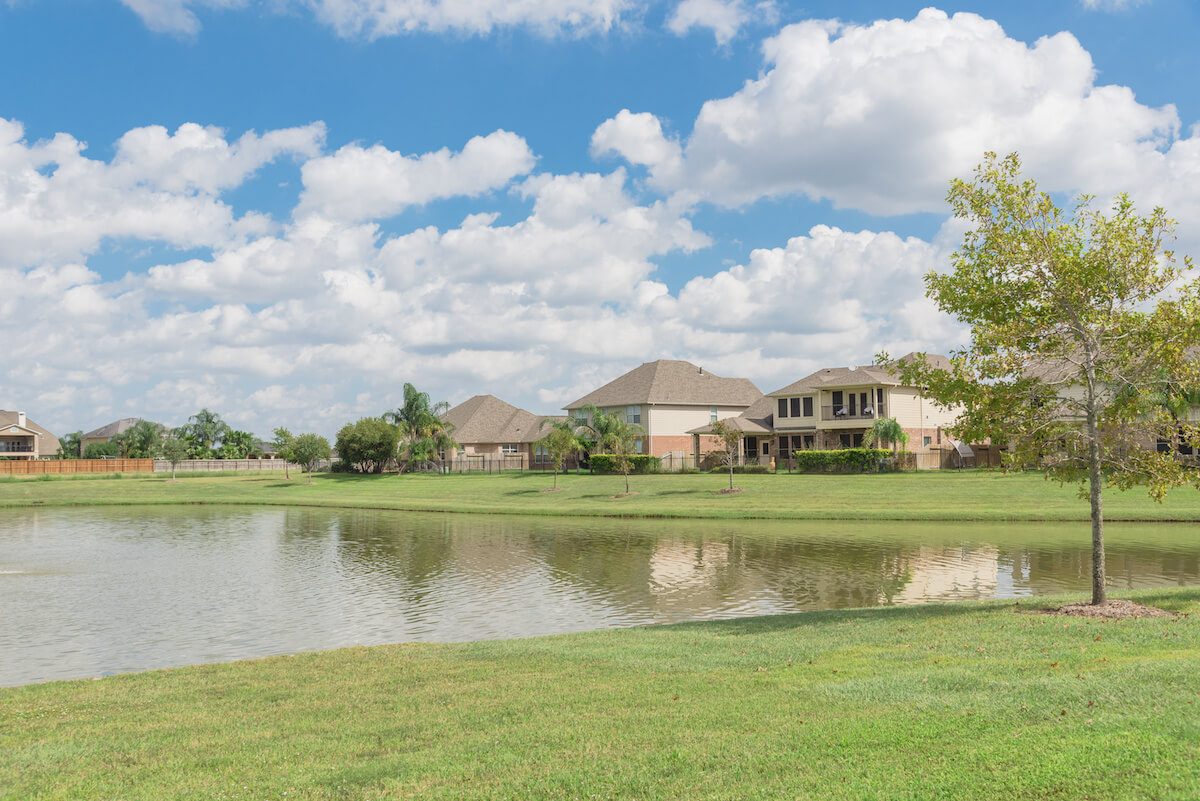 Like many Texas communities during the late 1800s, Pearland was a product of the state's agricultural and railroad transportation boom. And, as you might guess, the town was named after the many fruit trees in the area. Located 20 miles south of Houston in Brazoria County, Pearland today hosts nearly 150,000 folks and ranks among the fastest-growing cities in Texas.

In recent years, several new master-planned communities near Houston have replaced the region's rice fields and ranch land. Neighborhoods like Silvercreek, Green Tee Terrace, and Shadow Creek Ranch feature a mix of townhomes and single-family properties, with plenty of new construction homes on the market. Floor plans here range from 1,000 to 5,000 square feet, and houses are typically built on generously-sized lots. Pearland is among the most affordable Houston suburbs, with many homes for sale in Pearland priced in the $200s.

Pearland is convenient to the Texas Medical Center and the University of Houston. Less than 20 miles away, sports fans will find NRG Stadium, home of the NFL's Houston Texans, while the Astros' Minute Maid Park is just a 30-minute drive. There are also plenty of places to eat, shop, and things to do in Pearland.

A favorite area activity is watching folks try to pick a side in the battle of the BBQ joints. The pits at Central Texas BBQ in the middle of town have been smoking for more than 50 years, while relative newcomer Killen's Barbecue, just a quarter mile away, has garnered national acclaim for serving some of the state's best BBQ. The bottom line: moving to Pearland is a great move.

Among the defining features of the best affordable places to live in Houston, Texas, aside from low housing costs, are their quality of conveniences and neighborhood amenities. Plus, there’s never a shortage of things to do in Houston. Finding a house at a great price is good. Buying an affordable property in a community you can call home is even better.